SCOTTSDALE, Ariz. — Even as we sleep, our brains are still hard at work processing and going over the events of our lives. Nighttime brain activity often manifests itself as dreams, and every now and again we all experience the occasional bad dream. If you’ve ever woken up from a particularly odd nightmare and wondered if anyone else has experienced something similar, you’re in luck: a recent survey of 2,000 Americans has compiled a list of the most common nightmares.

Whether you’re prone to nightmares of being chased by monsters or shady individuals, or something a bit more nuanced such as being late for an important event, most (if not all) of us have had at least a few frightening dreams over the course of our lives. As it turns out, the research, commissioned by Amerisleep, identified a nightmare classic as the most common scary dream: the terrifying vision that we’re falling (64.7%).

So, why are nightmares about falling so universal? While experts aren’t exactly sure, there are a few popular theories. One states that as our bodies fall asleep, the relaxing of our muscles actually tricks our brains into believing we are really falling. Another theory is that falling nightmares are caused by our nervous systems shutting down for the evening. 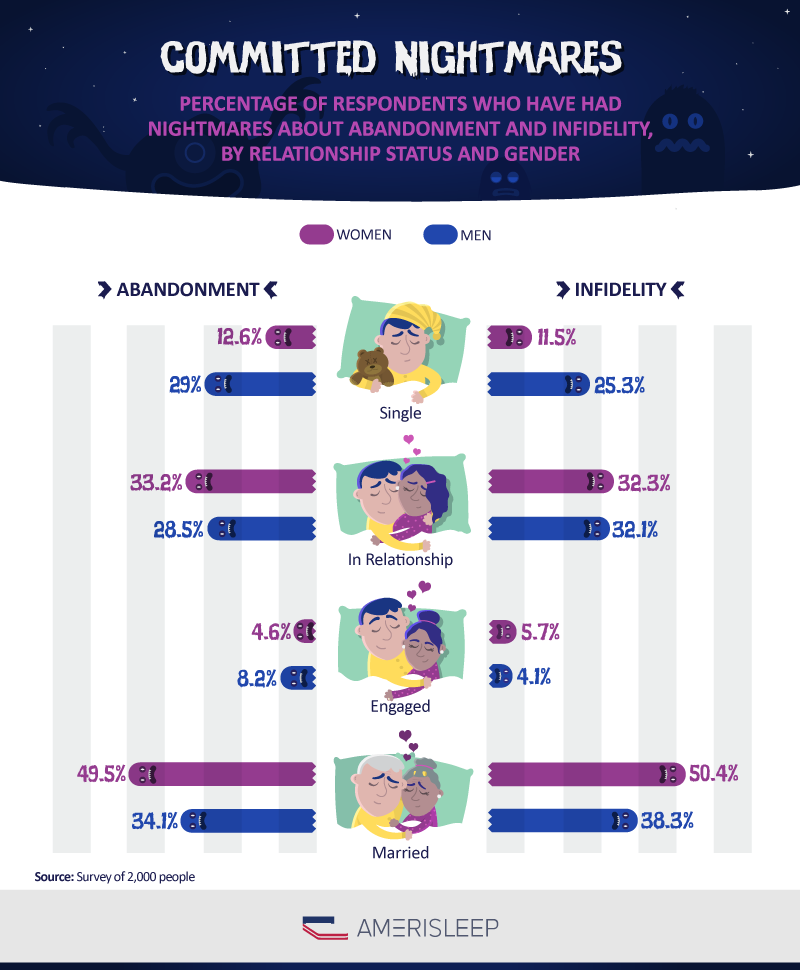 Another recurring nightmare topic was, perhaps surprisingly, sexual nightmares, which two in five respondents have experienced. Conversely, being cheated on by a significant other (27.8%) was a less common dream, along with being left entirely by a partner (27%). Surprisingly, even single Americans frequently have nightmares on this subject matter. For whatever reason, single men are actually more than twice as likely as single women to dream of an imaginary partner cheating on them. On the other hand, women in relationships are more likely to have such dreams than men in relationships.

Among all respondents, though, married couples reported the most frequent dreams about infidelity. In all, 50% of surveyed married women said they have had a nightmare about their husband with another woman.

Researchers broke down their findings by gender as well, and noted that women (61%) tend to have dreams about a loved one dying more often than men (39%). Conversely, men usually have nightmares about technology breaking down (66%) far more than women (34%). Another 60% of female respondents reported dreaming about bugs crawling all over them, while 40% of males said the same. Women also tend to have more dreams about their homes burning down or being destroyed.

Nightmares, just like all dreams, have deep-seated psychological causes. Most people believe that nightmare are manifestations of their most private fears and anxieties. When respondents were asked about the fears they most frequently experience in their nightmares, harm being done to their own well-being was the most popular answer (53%). Another 17% said they usually have nightmares related to their job or profession, and 12.5% said their nightmares are always centered around their families and close relationships. Perhaps surprisingly, less than 4% of respondents said they have nightmares about their medical health or friendships.

The research also looked into specific nightmares among different professions. Those in the journalism and broadcasting fields usually dream of missed deadlines and unpreparedness, while people who work in arts and entertainment frequently have nightmares about being naked in public. Across all professions, showing up late to work was identified as a common nightmare. 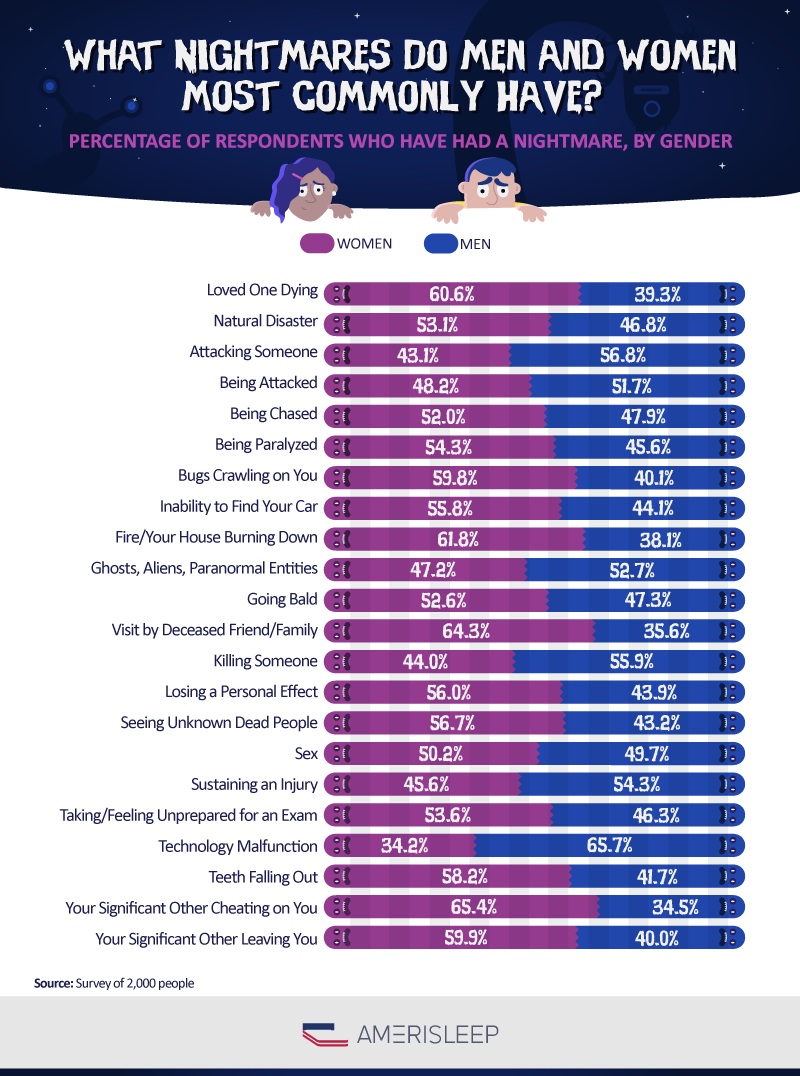 Survey: Parents Spend 37 Hours A Week Worrying About Their Kids